Welcome to Sharpe's Wiki, an encyclopedia reference to the twenty-one novels and three short stories by Bernard Cornwell featuring the character of Richard Sharpe, as well as the television movies based upon them.

We are currently working on 455 articles.

"The Light Company were not worried by the French.
If Richard Sharpe wanted to lead them to Paris they would go, blindly confident that he would see them through."
Sharpe's Gold

Richard Sharpe is the fictional protagonist of a series of 21 novels and three short stories chronicling his career as a soldier in the British Army. Written by Bernard Cornwell, the series follows Sharpe's adventures throughout his twenty-two year career; originally only 11 books covering the Peninsula War, the author has since added another ten volumes to cover highlights of Sharpe's career from his time as a private to career's end at Waterloo and beyond.

Cornwell begins the timeline with Sharpe's Tiger when Sharpe is Private in the 33rd Regiment of foot in India. He is promoted to Sergeant by the end of the book. He was promoted to Ensign in the 74th Regiment by the end of his time in India, and transferred to the newly formed 95th Rifles as a Second Lieutenant during Sharpe's Trafalgar. Circumstances and ambition allow him a prominent roll in the fighting in Spain and Portugal, and he is promoted through the ranks with every feat and victory, finally promoted to Lieutenant Colonel in Sharpe's Waterloo.

Sharpe has been released in both in novels and in film. The Sharpe novel series ran from 1981 to 2007. The Sharpe television series ran from 1993 to 1997. Two additional movies were made in 2007-2008. The two versions do not always follow the same story line, and include both major and minor differences in plot. Indeed, several of the television movies are original, and have no bearing on any novel plot line.

The series engendered the Sharpe Appreciation Society and devotees from around the world. 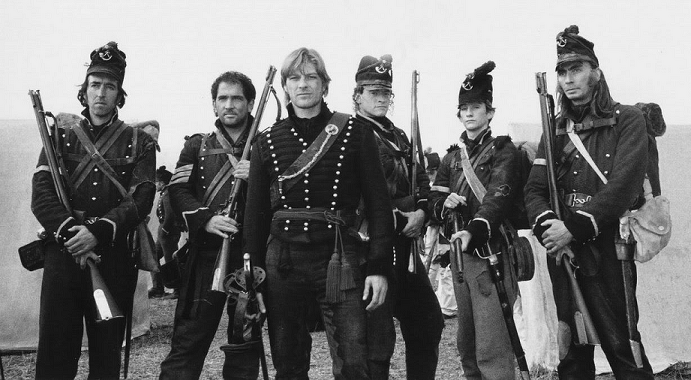 *WARNING: Because of the nature of this wiki, most of the character and novel articles will contain spoilers as to plot and story.

Community content is available under CC-BY-SA unless otherwise noted.
Advertisement